This is What Flexibility Looks Like in the Gig Economy

A parent who needs a flexible work schedule due to childcare responsibilities. An aspiring entrepreneur who does side gigs in her spare time while hustling to make it big. A retiree who wants to stay engaged by working whenever he feels like it. Anecdotes like these abound as more people are drawn to the gig economy due to the flexibility that this form of work offers.

In a survey we ran with our driver- and delivery-partners in 2021, the top two reasons selected by partners for why they choose to take up work via the Grab platform relate to the flexible nature of work (>70% selected “Flexibility of time”, >40% selected “Able to earn as much as I work”).1

But what does this flexibility really look like from a quantitative perspective?

The Public Affairs and Marketplace teams at Grab worked together to show with our data what flexibility looks like in the gig economy. The analysis illustrates the extent to which partners actually make use of the flexibility offered to them. We conducted this analysis using data from partners who were online for at least what would be considered “full-time” based on traditional employment definition – an average of at least 35 hours per week2 over a period of 10 weeks, to understand the difference between someone who does gig work “full-time”, versus an employee.

This is an illustration of what inconsistent work patterns look like when partners utilize the flexibility they have to decide when and how much they want to work:

The extent to which an individual partner exhibits consistency in their working schedules can be quantified using the manhattan distance metric. The higher the number (between 0-1), the more inconsistent the partner’s working pattern:

The distance score represents the share of one’s working hours that are in different hour blocks. In the above example, the distance score is 0.33, which means that 33% of the hours worked are inconsistent.

We applied this analysis on a dataset of food delivery-partners on Grab Singapore’s platform who were online above what would be considered “full-time” hours – on average of at least 35 hours per week over a period of 10 weeks from 28 Dec 2020 to 7 Mar 2021.

The data reveals that the median delivery partner had a distance score of 0.52, which means that ~52% of the hours online were inconsistent: 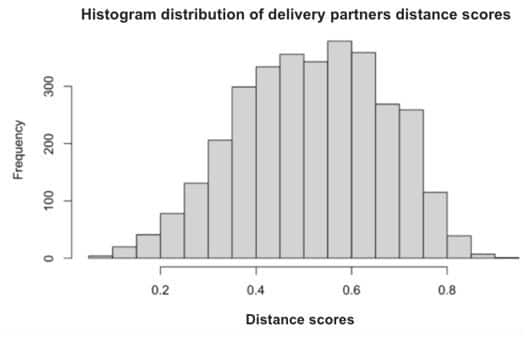 We created a graphical illustration of the work pattern of an “average” partner in the 50th percentile. This is how to read the chart below: To understand how this compares with someone in a traditional job with a fixed work schedule, we ran a simulation of what this would look like for the hypothetical office worker, with the following assumptions:

The simulation shows that on average, office workers are likely to have a distance score of 0.08, which means that ~8% of the hours worked are inconsistent: We replicated the graphical illustration of the work pattern of an “average” office worker in the 50th percentile: 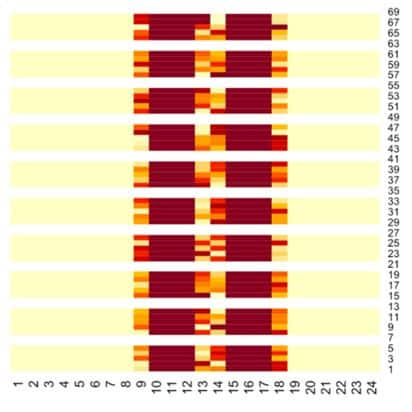 Putting both populations together to compare the distribution of distance scores, it is clear that Grab Singapore’s delivery-partners who typically come online on what is considered a “full-time” basis have a highly inconsistent work pattern (area in blue in chart below), compared to office workers (area in red below): The inconsistency also extends to the amount of time they come online over time. This is implicitly captured in the earlier analysis, but we want to bring to life what this means in relation to more traditional definitions of work commitment.

These are ten different delivery partners on the platform, with the number of hours they are online on the Grab app each week, since the start of 2021: From the charts above, we can see that delivery partners easily move between being online for “full-time” hours (>35 hours per week), to “part-time” hours, to not even being online on the app at all, on a week to week basis. This illustrates the flexibility they have and take advantage of, which also makes it impractical to classify them as “full-time” or “part-time”, as these can change very quickly and frequently.

This is unique to gig work, as traditional employment is usually unable to accommodate such huge variations in commitment levels. It is a key part of the draw of “flexibility” that many who enter gig work talk about.

Implications on policy-making for the gig economy

The above analysis demonstrates that the relationship between people who take up gig work via platforms, and platforms who offer these opportunities is a unique one. There exists a power of choice on the part of gig workers which gives them flexibility, as the data shows, that they do exercise. On the flipside, this means that platforms facilitating gig work also face the uncertainty of not knowing whether there will be enough gig workers available to fulfill customer demand in the marketplace. While the marketplace adjusts itself to have prices go up when supply is low, this is very market-driven, and there are still instances where higher prices do not equate to people willing to take up jobs (many of us would have experienced still finding it challenging to get a booking during the holiday season, where partners may choose not to work to celebrate the season with their loved ones).
The lack of platforms’ control on when and how much gig workers choose to work is a distinctive benefit for participants in the gig economy. This, in turn, is an uncertainty that platforms need to deal with, since they are unable to plan for their business and availability of services with full certainty, in contrast with companies that can rely on employees to run the show. The gig economy and traditional employment models are two fundamentally different ways of running a business.
That said, outstanding issues concerning gig worker welfare and protections still remain, which are important to address. However, given the different commitment levels and barriers of entry the participants of the gig economy have in relation to platforms, it may be difficult and impractical for platforms to fork out the same level of benefits as what a regular full-time employee would receive.
Gig workers’ needs can be met in different and better-tailored ways. The private sector has been innovative in coming up with new models to address these new issues. For example, Grab Financial Group has partnered with NTUC to create the first ever pay-per-trip Critical Illness microinsurance customized for Grab’s driver-partners. The design of the product is compatible with driver-partners’ earning patterns in gig work, to help smoothen their cash flow and make insurance coverage more accessible to gig workers.
That is just one innovation tailored to the gig economy, and the possibilities for further innovation are immense. Grab believes that governments, industry and other gig economy stakeholders should collaborate and experiment with new ways to get to the desired outcome of ensuring gig workers have adequate welfare and protection.
1 Grab 2021 partner survey of 5,000 partners across Southeast Asia, verified by Nielsen 2 Based on the Singapore Ministry of Manpower’s definition of full-time work: 35 hours a week