Looking for the most popular place to visit in Southeast Asia? Going by our data from last year, that would be Malaysia, Truly Asia. Of all the overseas bookings by Grab users in the region, almost 43 per cent were made in Malaysia, edging out the closest competitor, Singapore, which netted just under two in 10 overseas bookings.

The findings are part of a broader trend of  Southeast Asians travelling more than before, many of them within the region. According to the ASEAN Secretariat, intra-ASEAN travellers in 2015 already made up 42 per cent of the region’s overall tourist numbers. The intra-Southeast Asian traveller segment today accounts for over 37 million trips, according to Grab market research data.

That’s all of you – travelling for work and play. So, to cater to Southeast Asia’s road warriors, frequent travellers and savvy trippers, Grab is launching a new suite of travel benefits for Grab Platinum, Gold and Silver users travelling across the region. The programme has signed up more than 150 partners in all of the major airports across Southeast Asia including Kuala Lumpur International Airport. Benefits and deals include access to up to 70 lounges across the region, with rates of up to 55% off, and discounts of up to 20% at over 80 F&B partners.

In Malaysia, Grab users can relax at the Plaza Premium Lounge in Kuala Lumpur, Penang, Kota Kinabalu and Langkawi, as well as the Wellness Spa in Kuala Lumpur. They can also enjoy F&B discounts at Burger King  and The Chicken Rice Shop at the national airports.We launched this based on insights gained from six years of serving travellers in the region, and learning about what you’re like.

What else did we learn? Read on:

When Malaysians go travelling…
They go to neighbouring Singapore! Last year, more than 1.2 million Malaysian tourists visited Singapore, with almost 13%  making that trip via the Second Link or the Causeway. With the ease of land travel between the two countries, it is little wonder that one of the top pick-up points for Malaysians in Singapore was Woodlands Checkpoint. Another firm favourite was the iconic Marina Bay Sands, with its wide range of dining, shopping and entertainment options.

And in Thailand, another popular destination for Malaysian travellers, the top shopping mall was upmarket CentralWorld, while travellers from other countries preferred the more mass-market Platinum Fashion Mall.

Many Malaysian residents choose to use Grab overseas because they feel it’s a safer option. Florian Steinbichl travels around the region three times a month and has always relied on Grab to get him from the airport and around the city.

“Grab has a fixed price and additional costs like tolls are clearly stated,” said the technical engineer. “Plus safety is also the biggest advantage with Grab.” Passengers like Florian can also collect GrabRewards points – given for every transaction using GrabPay credits – for greater savings and value. 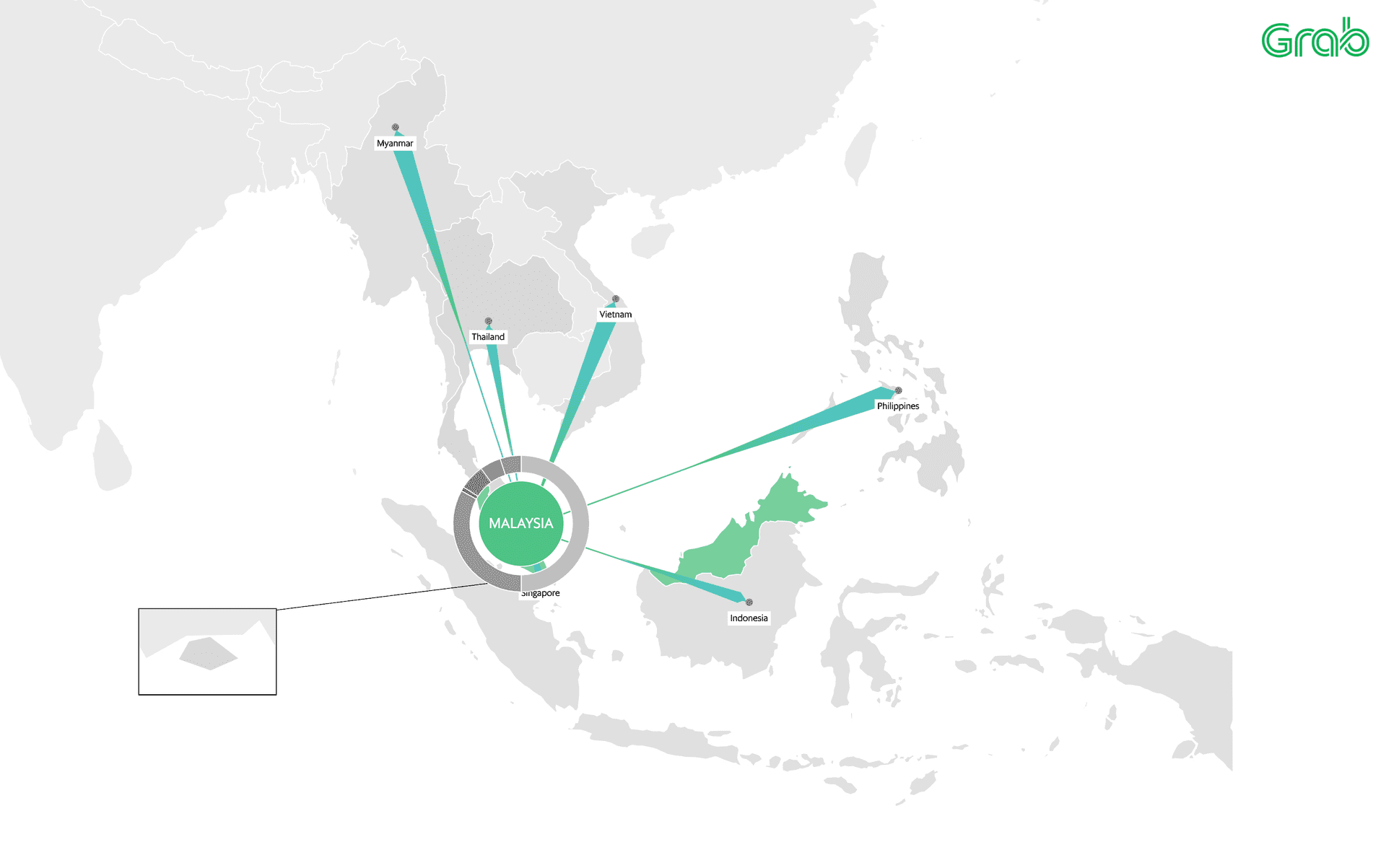 Where do Malaysia Grab users visit when they travel? Which are the top pick-up points for tourists in Malaysia? Explore these and more in our interactive map.

When travellers come to Malaysia
Last year, Malaysia welcomed 25.8 million visitors, with Singapore and Indonesia being the top two visiting countries. Of the Grab bookings made by travellers in Malaysia, half were by Singapore users and a third by Indonesians.

Making it easy to travel in the region
Well, Southeast Asia is truly a melting pot of cultures. It’s charming, colourful and diverse but it’s not exactly easy navigating the different languages, currencies and infrastructure. And it hits you most when you first arrive in a foreign land.

Here’s where Grab helps. “The Grab app is easy to use and it’s convenient to get a ride from the airport to the city,” said Thomas Tan Cheng Hoe, a business manager. “It’s the best way to avoid queues.”

For Khaw Cheng Chuan, who works in sales, the auto-translate function is a big plus. “Grab is so convenient as I don’t need to speak different languages, and can still get to my destination,” he added.