Jakarta, August 16, 2019 – Grab’s two-wheeled transportation service, GrabBike, celebrates the spirit of Indonesia’s 74th Independence Day with more than 74,000 GrabBike driver partners in various cities in Indonesia by distributing the newest GrabBike jackets. The jacket, which has been used as a protective device to ensure safety while driving, also has its own meaning as an identity to the driver’s partner. Equipped with the Red and White Flag to support the spirit of serving the Indonesian nation, the distribution of the new GrabBike jacket was also held to welcome the 74th Independence Day of the Republic of Indonesia and to give an appreciation to all of Grab’s driver partner, that is considered as the hero of online transportation in Indonesia. 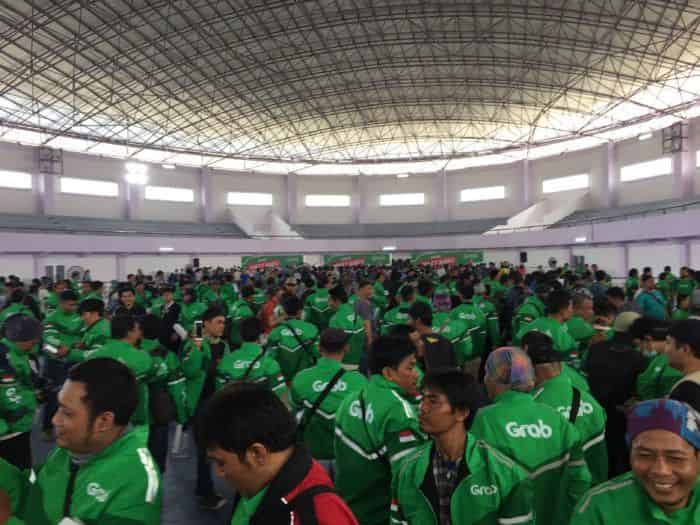 The distribution of the new GrabBike jacket began on August 3, 2019 and will continue until the end of August 2019. There have been more than 74,000 jackets distributed to Grab’s driver partners in the Greater Jakarta, Medan, Bandung, Makassar, Yogyakarta, Bali and Semarang. The distribution of this new jacket is also as a part of commemorating Grab Indonesia that has now become one of the Unicorn startups in Indonesia.

Richard Aditya, Head of GrabBike Indonesia said, “Grab’s new mission is to give the Indonesian people access to a safe and reliable daily service – and GrabBike’s driver partner is at the forefront in making this happen. We always encourage our driver partners to use the full attributes while driving, including helmets, official jackets, trousers and shoes, to improve the safety and smooth driving. In welcoming this year’s Independence Day of the Republic of Indonesia, we hope the new jacket can provide a new patriotic spirit for Grab driver partners in Indonesia, to serve better and be enthusiastic towards Indonesia’s progress moving forward.”

The new GrabBike jacket is equipped with a larger reflective strip on the back and arms that will increase the driving safety. This reflective line will glow in the dark and when it is exposed to light. This is to ensure the safety aspects of driving that have been regulated in PM12/2019 regarding online motorcycle transportation.

The distribution of the new GrabBike jacket is also in parallel to the commemoration of Indonesia’s 74th Independence Day held by Grab Indonesia. From 17 to 18 August 2019 various celebrations will be held simultaneously in eight major cities in Indonesia involving driver partners, merchant partners, Grab consumers and employees, which will also include the Red and White Flag raising ceremony and the “Merdeka Bareng Grab” Festival of food bazaar presented by GrabFood merchant partners with a traditional 17th August contests, and a musical performance for all visitors. The event is expected to celebrate the hard work of Grab’s driver partners and merchant partners who are at the forefront of Grab in serving Indonesia.

As one of the Unicorns in Indonesia and also the first Decacorn in Southeast Asia, Grab always has a positive impact to Indonesia’s economic growth. Grab Indonesia is proud to be able to empower driver partners and serve consumers among 224 cities in Indonesia, from Sabang to Merauke. The Center for Strategic and International Studies (CSIS) and Southeast Strategics released a study on Grab’s contribution to the Indonesian economy estimated at Rp 48.9 trillion in 2018. GrabBike driver partner income also increased 113% after joining Grab, to an average of Rp4 million Every month. As many as 29% of GrabBike driver partners are over 41 years old, and 38% of the total respondents previously had no source of income.

Early last month, Grab announced an investment of USD 2 billion for Indonesia over the next five years through capital invested by SoftBank in order to support the development of digital infrastructure in Indonesia. This investment will be channeled to build the next generation of urban transportation networks and transformation of important services such as the health industry.

“We hope this new jacket can illustrate the new spirit of Grab Indonesia, as one of the Unicorns in Indonesia to continue to provide services that have a positive impact on everyone’s growth,” concluded Richard.