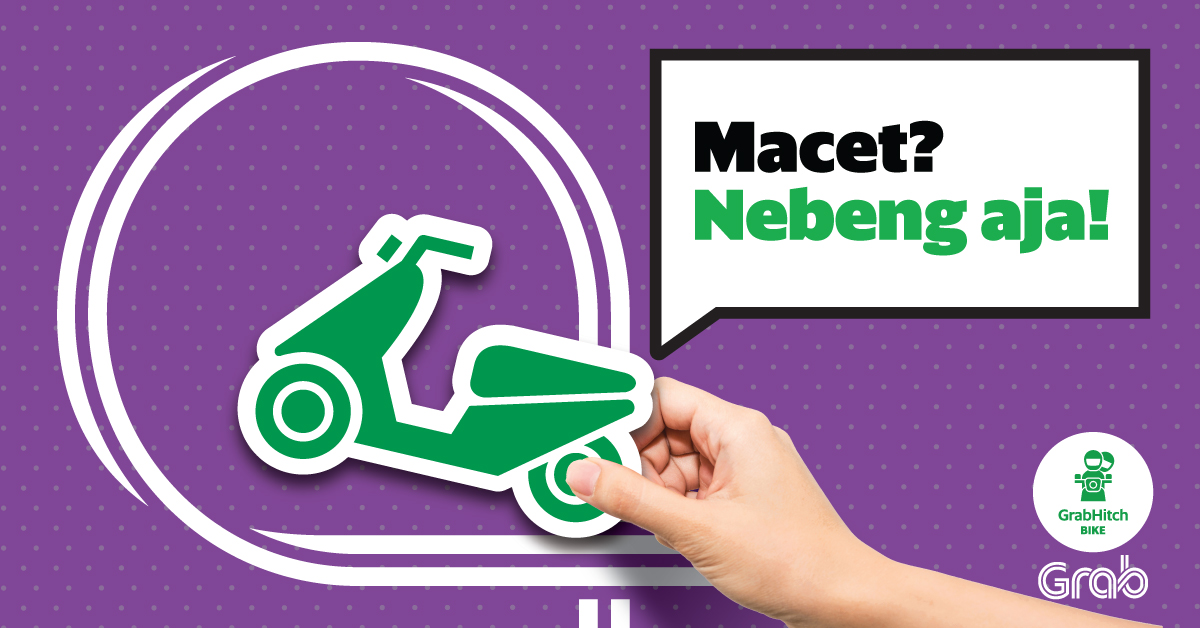 Jakarta, 19 October 2017 – Grab, the leading on-demand transportation and mobile payments platform in Southeast Asia, today celebrates the first anniversary of its pre-scheduled motorbike hitch service, GrabHitch (Nebeng) Bike in Jakarta. In the past one year, GrabHitch (Nebeng) Bike hasn’t only managed to receive a warm welcome from the users, but also actively driven several positive impacts that are in line with its goal to alleviate traffic congestion in the capital city of Indonesia.

“At Grab, we found that cities with high levels of congestion, low car ownership but high motorcycle ownership, could be primed as markets for ‘bike-pooling’ rather than carpooling. Motorcycles can weave in and out of traffic in ways a car cannot. Hence, our first entry into the ride-sharing space in Jakarta last year was via GrabHitch (Nebeng) Bike, capitalizing on the pent-up demand for daily commutes between the city centre and its outskirts, such as Bekasi, Depok, and Tangerang. To implement this concept, we have carefully considered the local conditions and usage patterns of transport in here as we believe there is no one-size-fits-all solution,” said Mediko Azwar, Marketing Director of Grab Indonesia.

GrabHitch (Nebeng) Bike is a service that matches motorbike drivers who commute alone to work daily with passengers who are going in the same direction so that they can commute together. During its one-year presence, it has connected 820,000 users, making door-to-door long-distance rides more pocket-friendly & exciting with the opportunity to share the cost of their rides and socialize at stops during the long-distance rides. By allowing shared rides, it also has contributed to reducing 1,057 motorcycles commuting into Jakarta every day and saving 1.6 million kilograms in carbon emission every year. The total carbon emission is equivalent to the amount of carbon dioxide (CO2) emitted by desk lights for 4,500 children to study all day and night in a year. Thus, this service has contributed in alleviating the congestion as well as promoting environmentally friendly lifestyle at once.

With these positive impacts, Grab is committed to further promote the concept of bike-pooling and unlock the benefits to more commuters living in the outskirts of Jakarta and society at large. Top three benefits available for the users of GrabHitch (Nebeng) Bike and society at large are: vehicle optimization to carry fellow commuter, personal cost offset, and ultimately reduction of traffic congestion & carbon emission.

“Jakarta’s traffic issues are complex and require multifaceted solutions. Bike-pooling can be a powerful additional alternative to the city’s transport mix to help alleviate congestion. With a social custom amongst Indonesians, who give lifts to their wider friend circle, we believe there is an opportunity to improve this city’s transportation through sharing its roads, its bikes, and its commutes. Hence, we are thrilled to spur bike-pooling through GrabHitch (Nebeng) Bike and looking forward to seeing how it can positively contribute to the development of this city’s transportation,” Mediko concluded.

Grab solves critical transportation challenges to make transport freedom a reality for 620 million people in Southeast Asia. Grab’s core product platform includes cars, motorbikes, and taxi-hailing. Grab is the #1 on-demand transportation platform in Southeast Asia with a market share of 95% in third-party taxi-hailing and 72% in private vehicle hailing and currently offers services in Singapore, Indonesia, Philippines, Malaysia, Thailand, Vietnam, and Myanmar. According to TNS, a global market research firm, in Indonesia, Grab is the brand that is used most often compared to other ride-hailing apps and taxi booking apps.