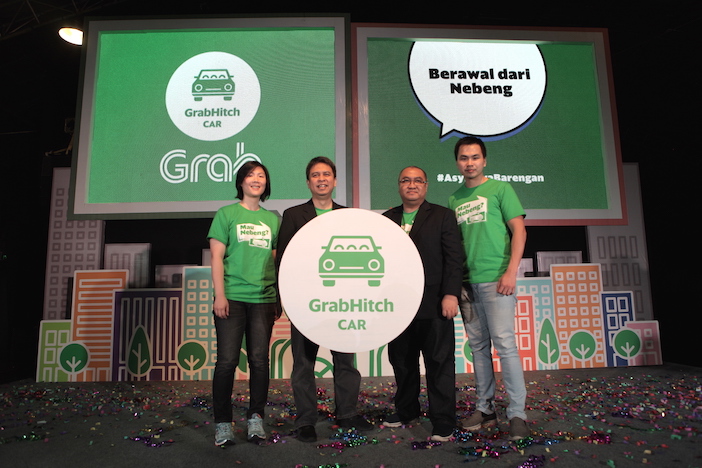 Jakarta, 24 May 2017 – Grab, Southeast Asia‟s leading ride-hailing and mobile payments platform, today launched the first four-wheels social carpooling service in Indonesia, GrabHitch (Nebeng) Car. The service is designed for regular commuters – ranging from Professionals, Managers, Executives, and Engineers – with extra space in their cars to pick up fellow hitch buddy who share similar route or destination, while at the same time reducing their operational driving costs for daily work commutes and inter-city trips such as on the Jakarta – Bandung and Surabaya – Malang routes. GrabHitch (Nebeng) Car will be a new and cool way to meet new friends, where commuters can have a companion as they travel to and from work.

Grab is committed to continuously innovate to fulfill Indonesians‟ transport needs, and provide additional services to make the Grab app experience even more seamless. The launch of   GrabHitch (Nebeng) Car in Indonesia is driven by the projection that car ownership in Indonesia is set to rise by 10.5% per year until 20201. The region‟s motorcycle owners are also expected to upgrade to four- wheeled vehicles, representing a large pool of first-time car buyers. GrabHitch (Nebeng) Car is an affordable point-to-point intercity travelling option and a comfortable daily commuting alternative to public transport or driving your own car. This will help to reduce the number of individual cars travelling to and from the city centre daily, by encouraging more people to travel together in the same vehicle.

“Specifically in Indonesia‟s major cities, the numbers of vehicles are considered high. Jakarta, for instance, recorded more than 3 million passenger cars in 20142 with approximately 8.75% growth every year. Imagine the significant pool of vehicles with extra seats for more hitch buddy. Every car has the potential to play a part in helping to reduce traffic congestion issue and air pollution in Indonesia‟s mega cities and meet the growing demand of rides each day. We‟re introducing GrabHitch (Nebeng) Car off the back of successful launches of GrabShare and GrabHitch (Nebeng) Bike, and are heartened that more Indonesians are using carpooling services as we all work together to reducing the number of vehicles on our roads,” explained Ridzki Kramadibrata, Managing Director, Grab Indonesia.

Commuting has been found to be one of life‟s least enjoyable activities. Especially that commuting times have steadily increased in the big cities, and the rising problem of congestion has only exacerbated the issue of wasting time, money and fuel. According to INRIX in its all-new Global Traffic Scorecard, Jakarta, Bandung, Malang, and Surabaya are named as several of the most congested cities in Indonesia and Asia at large3.

“Commuting has significant psychological and social costs. It can be a major cause of stress due to the unpredictability and a sense of loss of control. Commuters can experience boredom, social isolation, and anger and frustration from problems like traffic or delays. So, we at Grab think of how we can make things better for the commuters. As the sharing economy becomes mainstream, Grab believes that there is a growing niche of commuters, for whom transport is not just a transaction, but an opportunity to build connections with fellow commuters. GrabHitch (Nebeng) Car encourages commuters to shift into carpooling community with exciting benefits, both for drivers and hitch buddy,” said Mediko Azwar, Marketing Director Grab Indonesia.

GrabHitch (Nebeng) Car requires advance booking, and Grab will match hitch buddy requests to drivers who share similar journeys. Hitch buddy and drivers can schedule a trip from 15 minutes up to 7 days in advance. Drivers are only allowed to accept a maximum of 2 rides a day. It is a not-for-profit service and drivers can share the costs of their daily commute with other commuters.

“Through ‘It all starts with a Hitch’ campaign, we spark the idea that anything can happen started with a hitch as this service provides an opportunity for people to socialize and exploring novel things with their new friends and potential business partners thus expanding their social network. The first phase of this campaign embraces the idea of ‘Together is more fun or Asyiknya barengan’: There are lots of things better to be done together and definitely more fun when people have someone to share with, particularly when getting stuck in a traffic, such as listening to music or singing together; engaging in a conversation, playing games, sharing food, and social networking. With a new friend, people will have someone to talk to and have fun together, enabled by GrabHitch (Nebeng) Car,” concluded Mediko.