Where do Thai travellers love to go? Malaysia!

Based on our data from last year, Thai Grab users booked a third of their overseas rides in Malaysia. (Well, they are neighbours, after all!)

That’s all of you – all travelling for work and play. So, to cater to Southeast Asia’s road warriors, frequent travellers and savvy trippers, Grab is launching a new suite of travel benefits for Grab Platinum, Gold and Silver users travelling across the region. The programme has signed up more than 150 partners in all of the major airports across Southeast Asia including Suvarnabhumi Airport. Benefits and deals include access to close to 70 lounges in the region, at rates of up to 55% off, and discounts of up to 20% at over 80 F&B partners.

Shopping ranked high for the Thais, based on where they booked Grab rides from. In Jakarta, the Thai users were at Grand Indonesia Mall while in Kuala Lumpur, they could be found at Pavilion and KL Sentral.

Interestingly, the Thai travellers also seemed more open to venturing off the beaten path. In the Philippines, while top pick-up points for the other countries congregated in Manila, the Thais were booking rides in Cebu. And in Vietnam, they were the only ones with a favourite pick-up point outside of Ho Chi Minh and Hanoi – the airport in Danang. 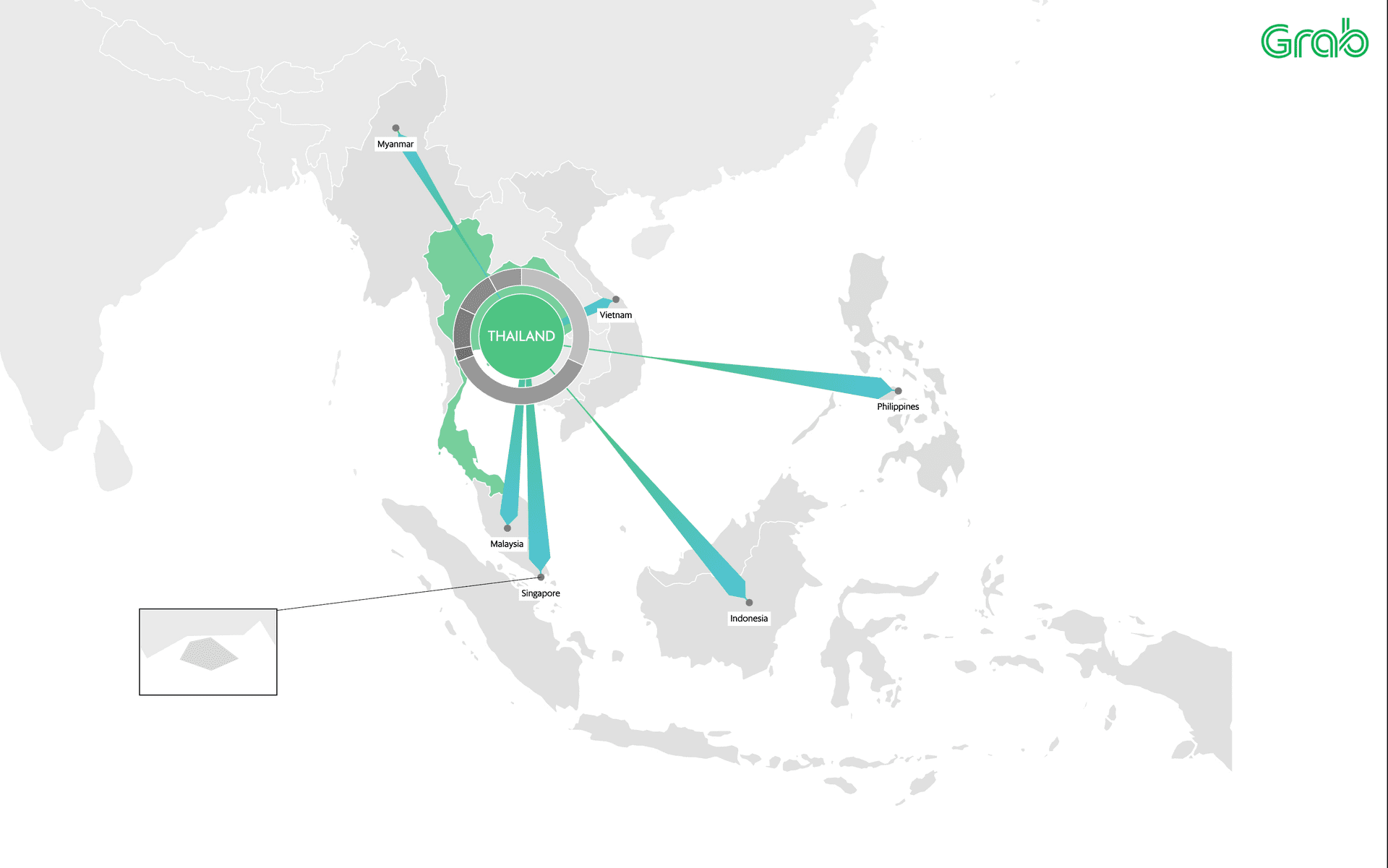 Where do Thai Grab users visit when they travel? Which are the top pick-up points for tourists in Thailand? Explore these and more in our interactive map.

When travellers come to Thailand
Last year, Thailand welcomed more than 38 million tourists. Of the Grab bookings made by travellers in the country, a third were made by Singapore users and another third by Malaysia users.

For visitors to Thailand, the two airports remained the top pick-up points for all the countries. Famous for its shopping, it wasn’t surprising that shopping malls, such as The Platinum Fashion Mall and Big C Supercenter Ratchadamri, were the other popular pick-up points.

To help the Tourism Authority of Thailand understand the behaviour and lifestyle of tourists in the country better, Grab is collaborating with the government to build a smart data system that can analyse the large amount of aggregate data available.

Making it easy to travel in the region
Southeast Asia is indeed a melting pot of cultures. It’s charming, colourful and diverse but it’s not exactly easy navigating the different languages, currencies and infrastructure. And it hits you most when you first arrive in a foreign land.

One of the advantages offered to tourists who use the Grab app is an auto-translate feature. When May Cherry Aung Sann visited Thailand from Myanmar, she found it comforting that the Grab app could translate from Myanmarese to Thai and vice versa.

“Grab is the easy and cheap option for trips in Thailand,” she said. “Just key in the destination and there’s a fixed fare, with no language barrier at all.

The app also localises automatically with the correct maps and rates in local currency, all in the local language. It even shows you what services are available in that city. For example, you can try GrabRemorque in Cambodia, GrabBike in Jakarta, Grab Roddaeng in Thailand or GrabThoneBane in Myanmar.