What do a 70-year old art supplies store and a 2-year old ice cream parlour have in common?

Whether you’re a paying consumer or a business owner, adopting one of the many cashless payment methods or not is one of the hottest debates among Singaporeans going into 2018.

It’s only a matter of time that electronic payments, including mobile payments, will become the primary mode of payments for consumers in a Smart Nation. As we move towards a Smart Nation one shop at a time, business owners are making the choice to start offering cashless options to their customers. Merchants across industries, from an old school art store that’s been in the hands of the same family since 1947, to a young entrepreneur with his ice cream shop have decided to adopt cashless. We met with two of our merchants who were willing to share their story. 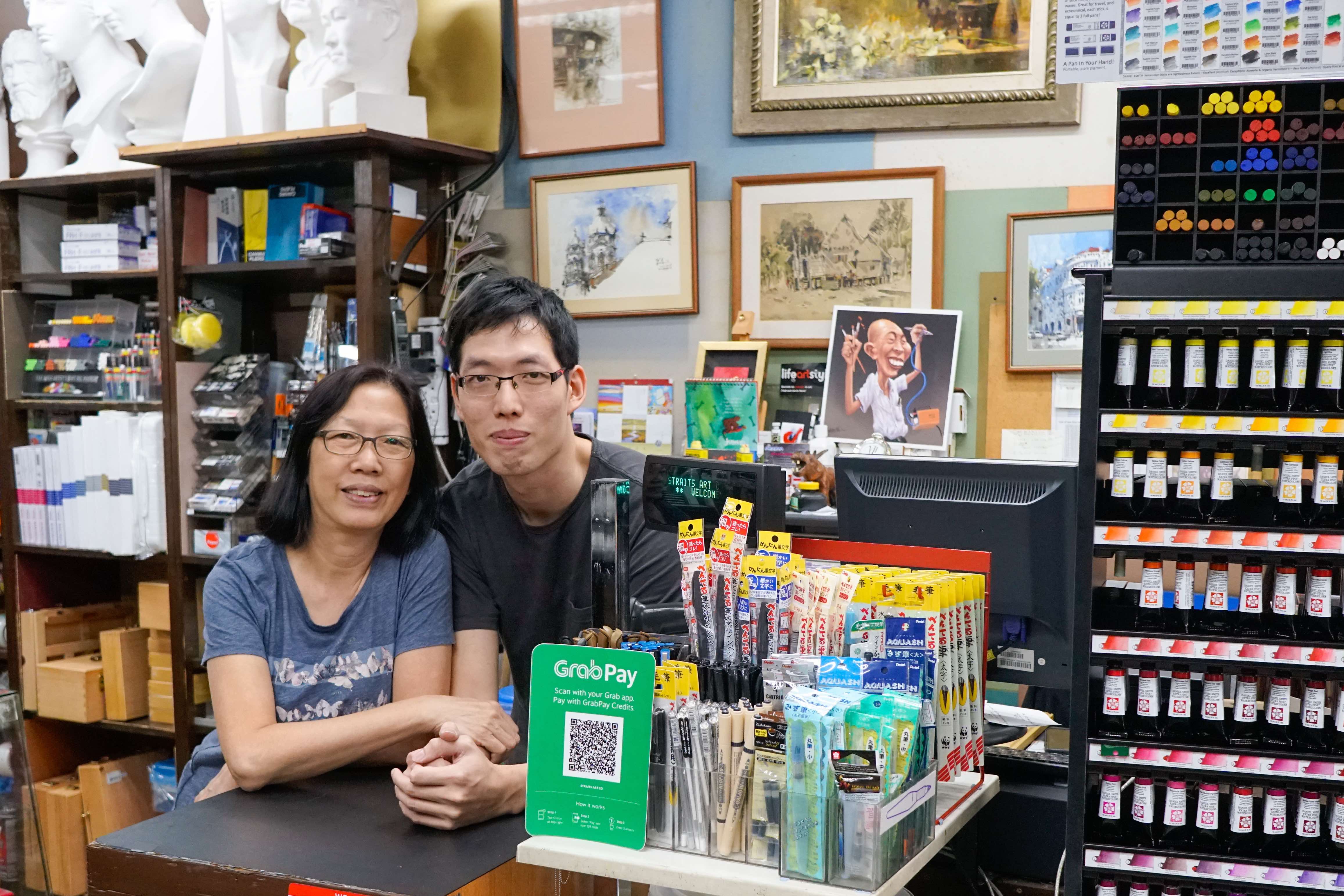 Straits Art Co., founded in 1947, is no stranger to those in the art scene. Their humble 60 m2 space packs in every art supply you can think of. Ms Clara Tay, who oversees all operations at the store, can point you to whatever art material you name her. A year ago, she enlisted the help of her freshly graduated son Yu, 25, who made the decision to join his mother in the business. With Straits Art Co.’s long history, he knew that there would be much to learn and contribute.

Cash transactions used to be the sole method of payment at the store, but that is no longer the case today. Straits Art Co.’s philosophy has remained the same over those 70 odd years: listen to the customers and offer what they need. In the early days, this meant offering new materials to work with in their calligraphy or clay section. Today, they keep their eyes open to the wants and needs of this generation’s artistically inclined. Yu shares with us that it took little convincing for them to understand the benefits of onboarding a cashless payment method like GrabPay.

“Nobody really carries around that much cash anymore,” quipped Yu. 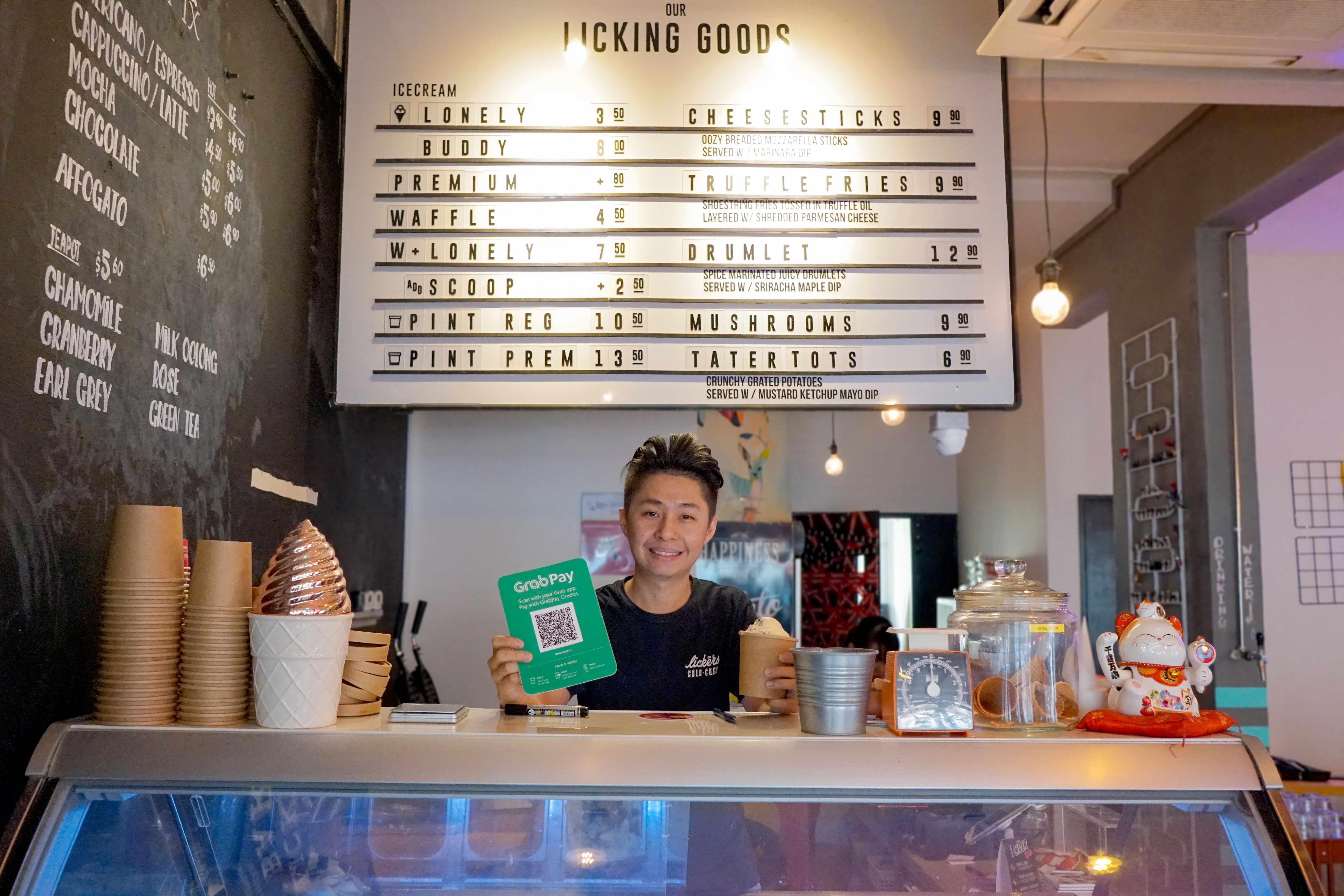 Felix Tan serving up a pint of Yakult Oreo ice cream, one out of the many unique flavours that Lickers has to offer, 5 Jan 2018.

Tucked away in an unassuming neighbourhood of North-eastern Singapore, Lickers Ice Cream has been serving up exotic flavours to people of all ages for the past 2 years. On a regular day, one may find a bunch of school students gathering for an after-school treat together, or an elderly couple who stops by after a stroll.

We met with Felix, 29, the owner of Lickers and learnt about his tenacity that brought the shop to where it stands today. Being a diploma school drop-out and very new to the food and beverage industry, Felix knew that he had little room to fail. He relied a lot on self-learning and valued feedback from his best advisors – his customers. Starting out as a cash-only business was the most cost-effective decision then, it was not until a year later that he started accepting cashless payments. Even then, the fees for operating a cashless system were not doing the shop a favour. He says that his decision to on-board GrabPay in the shop was well-received by his customers. In the ever-changing phases of his growing business, Felix knew that GrabPay would bring him a step closer to joining Singapore’s pursuit of a Smart Nation.

“Everyone is moving ahead and if you are not doing anything about it, you will lose out for not keeping up.”

More than 1,000 merchants in Singapore have now started accepting GrabPay

The stories of Felix, Clara and Yu were just a few out of more than 1,000 merchants who have now decided to offer cashless payments through GrabPay.

Hitting 1,000 merchants marks a significant milestone for the GrabPay team. We’re excited that our value proposition of access to Grab’s 4 million customers in Singapore, without having to adopt an additional payments device proves to be resonating for consumers and merchants alike.

More importantly, it’s incredibly meaningful to celebrate entrepreneurs and business-owners, each with their own backstory, steadily working towards a common goal by going cashless.

For a list of GrabPay merchants in Singapore, visit https://www.grab.com/sg/grabpay-merchant-list/