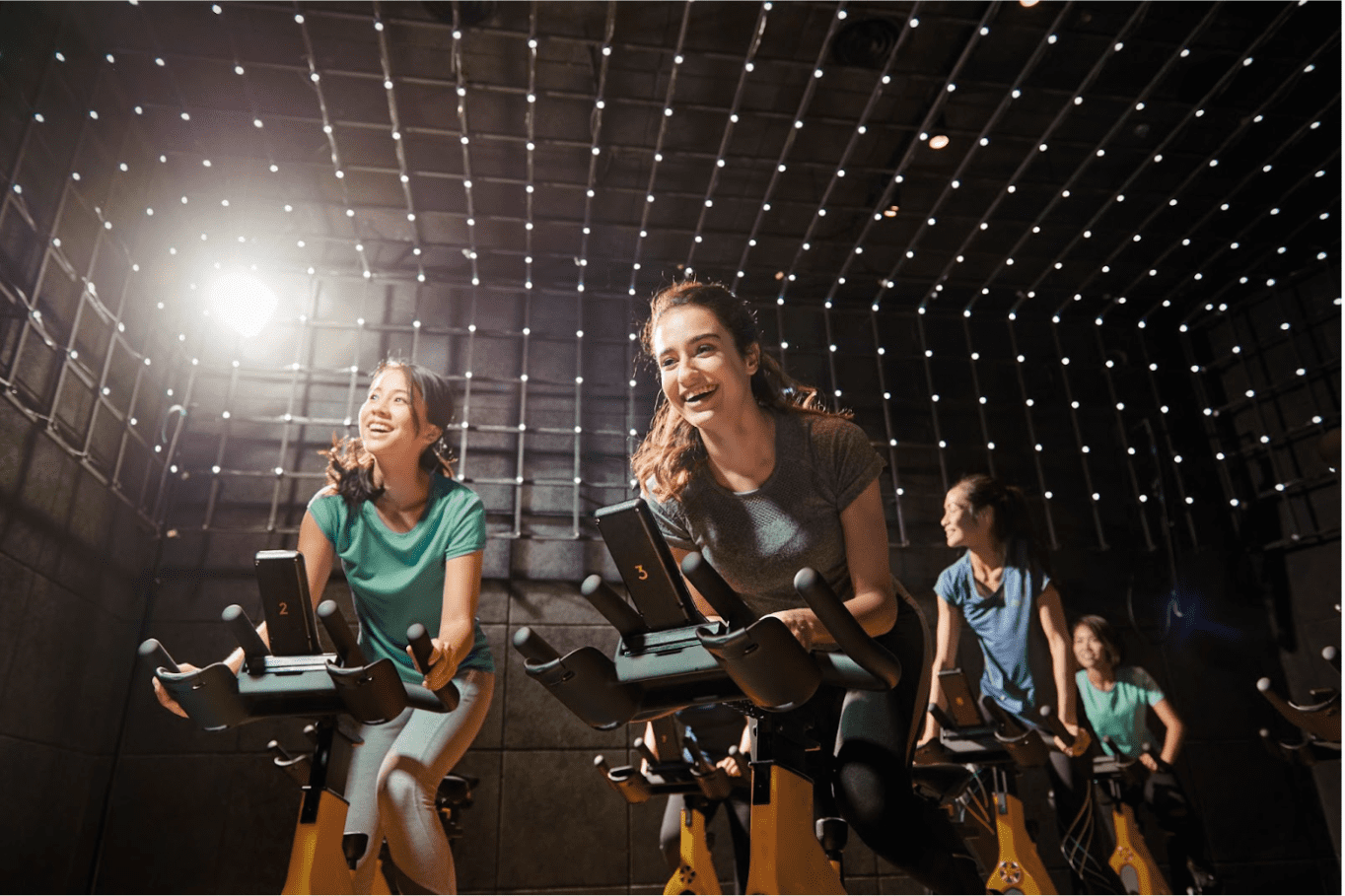 Does seeing green or red on your investing portfolio come as a surprise to you? You may think that’s a direct result of your luck and acumen, but there’s more to it than that. Look carefully and you’ll see an underlying pattern at work – a grand scheme of things called market cycles.

What are market cycles?

This refers to the economic trends within a period. Each cycle has 4 phases and at each phase, the changing market conditions will affect asset prices in different ways. These changes include rising, peaking, dipping and evening out. When things come full circle, the cycle ends and another one begins.

Why should I care about market cycles?

There’s no way to know the exact moment to enter and exit the market. Even moguls like Warren Buffett don’t claim to be able to time and predict the market. That said, an understanding of cycles can help you to be more strategic with your investing plan. Plus, having knowledge of how the market moves can make you feel more at ease when there are big swings.

Let’s look at the 4 phases of a market cycle.

When things hit rock bottom, the only way is up. Accumulation happens right after the market reaches the lowest point. At this point, many disheartened investors give up and sell their assets. But one man’s trash is another man’s treasure. This is also when experienced traders anticipate that things will start looking up and pick up these abandoned assets at a low price.

As market conditions improve, sentiments turn from negative to neutral.

As the market stabilises, more and more investors enter the scene and there is a notable increase in market volume. Valuations, referring to the estimated value of an asset, also start to go up. The positive change in sentiment encourages more who were previously hesitant to now jump on the bandwagon.

The result? Prices make one last upward movement, also known as the selling climax, where the largest gains happen in the shortest time.

While everything seems good and dandy, seasoned insiders are already unloading as the last of the bandwagon-hopping investors cash in. This is because these experts are anticipating the upcoming distribution phase where asset prices will start to drop.

This is where many investors start selling their assets as more foresee prices dipping after the climax. Just like the other phases, the distribution phase is non-linear. While asset prices seem to drop after the climax, there are points in which the market looks about to improve. It is exactly such market movement that makes it difficult to time and predict the market.

Sadly, those who couldn’t sell their assets at a profit are looking to minimise potential losses – reluctantly selling at breakeven prices or a little lower. They know (or they think they know) that holding on would only mean greater losses.

In most cases, prices tend to stay constant over a few months. This phase may last for some time if it is not sped up by sudden negative geopolitical events such as pandemics and wars.

In the end, what goes up must come down. When the distribution phase ends, asset prices start to drop more significantly in the mark-down phase. Investors who have held on to their assets to this point now panic that it has fallen far below what they’ve paid for.

The end of the mark-down phase will also usher in the accumulation phase of the next cycle, where savvy investors pick up the depreciated assets cast out by dismayed investors selling them at a loss. The cycle begins again.

How long does a cycle last?

In a way, market trends are unpredictable like fashion trends. Just like it’s tough to know when today’s must-have item will be outdated, it’s not possible to know for sure when the next phase or cycle comes. A market cycle can be as short as a few days, or as long as a decade.

That said, there are some tell-tale signs you can look out for. From what we have seen in previous cycles, the start and end of a cycle are marked by the time when asset prices are at their highest and lowest respectively. Investors gather the experience and insight from previous cycles to make calculated guesses about future shifts in the direction of the market cycle even before it happens. This is what it means when investors speculate.

Market cycles happen for the longest time – rising, peaking, dipping in endless succession. It’s impossible to predict it because it’s a result of events unfolding in real time. Things such as new tech and innovation, monetary policies, relationships between countries, and even elections could affect the duration and conditions of a market cycle. Not to mention changes in market regulations can disrupt existing market trends and create new ones.

Don’t get too close; see the big picture!

Have you ever been surprised by how things look different or even strange under the microscope? Market cycles can look scary when you peer too close. The surge and dips in prices during a single cycle may seem intimidating, but with a long-term perspective, you realise that asset prices may be steadily rising across the years! 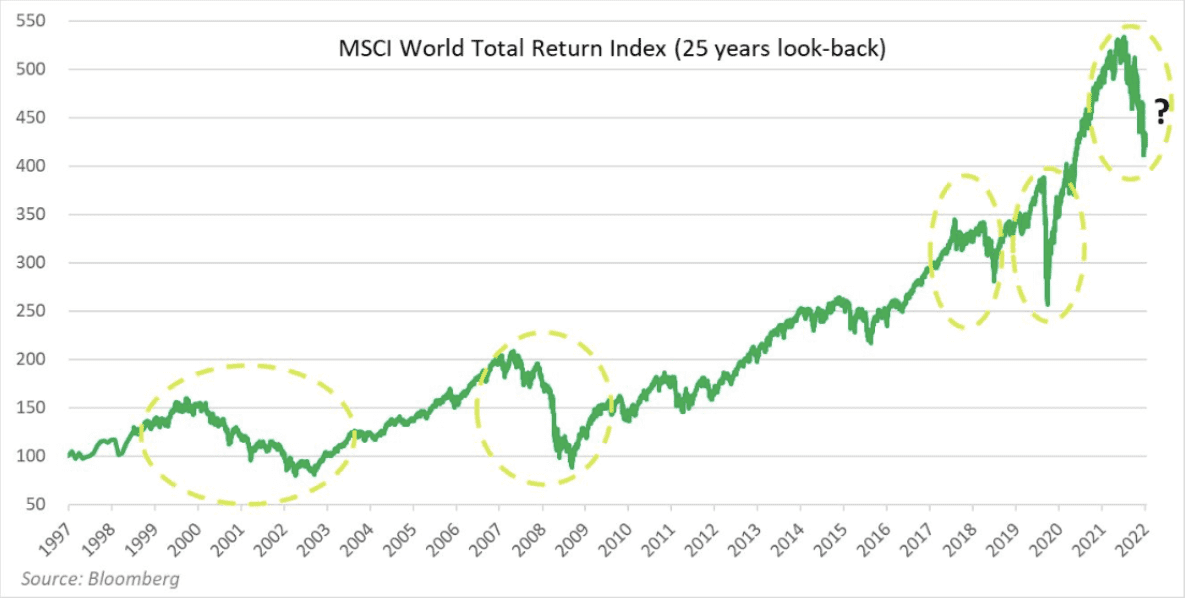 There is a hack – diversification and dollar-cost averaging

Feeling uncomfortable with the unexpected twists and turns in the cycle? The good news is changes tend to be specific to industry instead of affecting all sectors all at once. That means that diversification is key. With your assets diversified (spread across different sectors and asset classes), you wouldn’t be too worried if one of several sectors that your money is in gets affected. Investing regularly at fixed time intervals, also known as dollar-cost averaging, also aims to smooth out the impact of market fluctuations over time.

With Earn+, your money is invested into a low-risk, diversified portfolio to earn you an estimated 2 to 2.5% return p.a*. The portfolio is made up of short-term bond funds which are low-risk investments, managed by our expert partners – Fullerton Fund Management and UOB Asset Management. 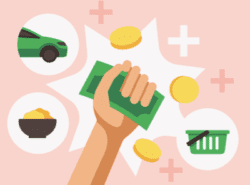 Find out more about how Earn+ supercharges your idle cash, or get started on the app.